The Dutch aquarium dates back to the 1930’s when glass cages made their first commercial appearance. An glimpse of a Netherlandish master garden will explain why the pioneers of aquascaping left their mark. This technique employs a lush arrangement in which multiple types of plants having diverse leaf colors, sizes, and textures are displayed much as terrestrial plants are shown in a flower garden. More than 80% of the aquarium floor is covered with plants, and little or no substrate is left visible.

also called Japanese style or ADA Aquarium. Compositions draw on Japanese gardening techniques that attempt to mimic natural landscapes by the asymmetrical arrangement of masses of relatively few species of plants, and carefully selected stones or driftwood. The objective is to evoke a landscape in miniature, rather than a colorful garden. This style draws particularly from the Japanese aesthetic concepts of Wabi-sabi, which focuses on transience and minimalism as sources of beauty, and Iwagumi, which sets rules governing rock placement. In the Iwagumi system, the Oyaishi,  or main stone, is placed slightly off-center in the tank, and Soeishi, or accompanying stones, are grouped near it, while Fukuseki, or secondary stones, are arranged in subordinate positions. The location of the focal point of the display, determined largely by the asymmetric placement of the Oyaishi, is considered important, and follows ratios that reflect Pythagorean tuning.

Jungle Aquariums are popular for their ease of maintenance. Separate from either the Dutch or nature styles, and incorporating some of the features of them both, these aquascapes portray a wild, untamed appearance using a helter-skelter mix of plants. Often the plants in a jungle aquarium are allowed to emerge from the water or fold under the surface to create a canopy. Trimming is a good idea before one species chokes out another. Bold, coarser leaf shapes, such as Amazon Sword, are used as focal points.

aquascapes are designed instead to replicate exactly a particular aquatic habitat at a particular geographic location, and not necessarily to provide a gardenlike display. Plants and fish need not be present at all, but if they are, they must match what would be found in nature in the habitat being represented, as must any gravel and hardscape, and even the chemical composition of the water.

In a paludarium, part of the aquarium is underwater, and part is above water. Substrate is built up so that some “land” regions are raised above the waterline, and the tank is only partially filled with water. This allows plants, such as Cyperus alternifolius and Spathiphyllum wallisii, as well as various Anubias and some bromeliads, to grow emersed, with their roots underwater but their tops in the air, as well as completely submersed. In some configurations, plants that float on the surface of the water, such as Eichhornia crassipes and Pistia stratiotes, can be displayed to full advantage. Unlike other aquarium setups, paludariums are particularly well-suited to keeping amphibians.[15]

terminal bud – when located at the tip of a stem

axillary bud – when located in the axil of a leaf

crown- refers to the totality of the plant’s aboveground parts, including stems, leaves, and reproductive structures.

Rhizome -a modified subterranean stem of a plant that is usually found underground, often sending out roots and shoots from its nodes. Develop from Axillary buds. The plant uses the rhizome to store starches,proteins, and other nutrients.

Stolon –  stems which grow at the soil surface or just below ground that form adventitious roots at the nodes, and new plants from the buds

Whorl – an arrangement of sepals, petals, leaves, stipules or branches that radiate from a single point and surround or wrap around the stem

topping – when pinching, cutting, or clipping a plant mid-stem

Alkalinity – The capacity to buffer against pH drops. The greater the alkalinity, the more stable the pH will be and the less likely that there will pH swings. Alkalinity can be raised by adding a carbonate buffer material. Alkalinity can also be maintained through the use of substance called kalkwasser.

BPM – Acronym for “bubbles per minute,” used to measure the amount of carbon dioxide bubbles released into an aquarium system when using a CO2 system.

Doser – A liquid distribution system, either gravity-fed or mechanically pumped, used to maintain aquarium water levels. They can also be used to add a controlled supply of additives, such as kalkwasser, or trace elements to your system.

Nitrate – Chemical compound formed during the final stage of the nitrogen cycle. It is the least toxic nitrogen byproduct often used by live plants. In large quantities, however, nitrate is still dangerous to your aquarium inhabitants.

Nitrite – A toxic byproduct of the nitrogen cycle. Nitrite is often broken down and used by plants in a planted aquarium or can be removed with water changes.

pH – Measurement of relative alkalinity or acidity. A pH reading of 7.0 is considered neutral, with readings higher than 7.0 (up to 14) being alkaline and readings lower than 7.0, acidic.

ppm – Abbreviation for parts per million, a measurement of a particular element commonly used in test kits.

QT- shorthand for Quarantine Tank – An aquarium setup for newly acquired or sick fish to isolate them from the main aquarium for observation or treatment until they can be safely introduced.

R/O Unit – Short for reverse osmosis units, which are water purification devices that force pressurized water through a semi-permeable membrane. The membrane allows only pure water to pass through while trapping minerals and impurities.

Substrate – Sometimes called aquarium gravel. Placed on the bottom of an aquarium, substrate can be purely decorative or functional. Decorative substrate is inert, causing little or no chemical/biological reactions while functional substrate contains minerals that influence water parameters such as pH and alkalinity.

Buffer – A substance added to the aquarium water to raise the alkalinity or adjust the pH. Several different types of buffering materials are available. Some can be used to raise or lower pH, and some can raise alkalinity without affecting pH.

Cyano – shorthand for cyanobacteria, also known as blue-green algae. Organisms that can form large colored mats. Cyanobacterium are a bacteria, not an algae.

Denitrification -The process by which nitrate is converted into nitrogen gas and released into the atmosphere. In the aquarium, denitrification is performed by anaerobic bacteria.

Detritus – Waste material that accumulated in gray piles in the aquarium. Detritus is high in nutrients and should be removed when possible to help prevent the growth of unwanted algae.

Foam Fractionation – [ A method of removing proteins from water through the use of foam. This is the filtration method used by protein skimmers.

LFS – An acronym used by aquarium hobbyists that stands for Local Fish Store. 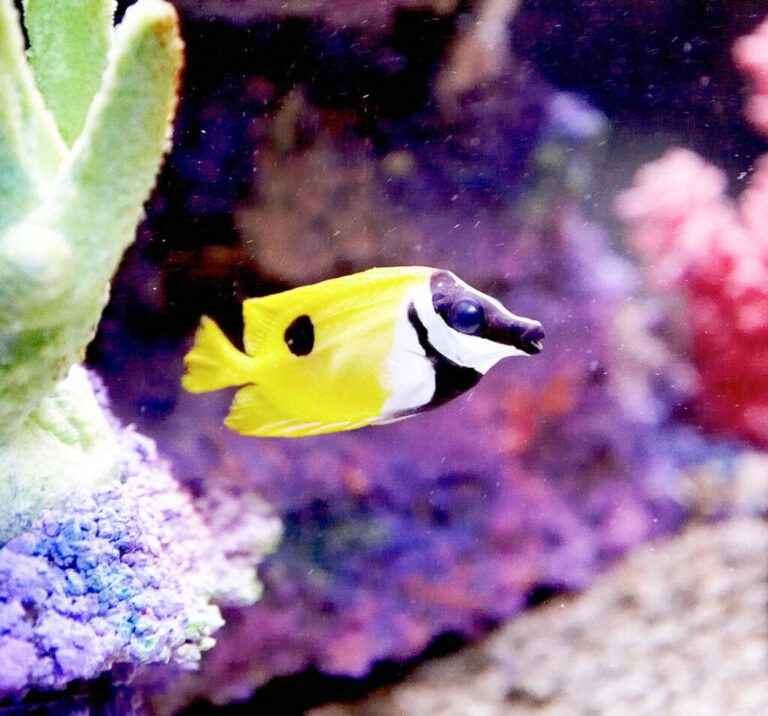 Refilling Your Aquarium Your aquarium may have a high-quality “sump” filter, located inside the cabinet stand. This sump is open and accessible. Fill the sump reservoir up to the “full” line. If too much water evaporates from the aquarium, bubbles will shoot from the filter tubes and cause algae to grow on the glass within… 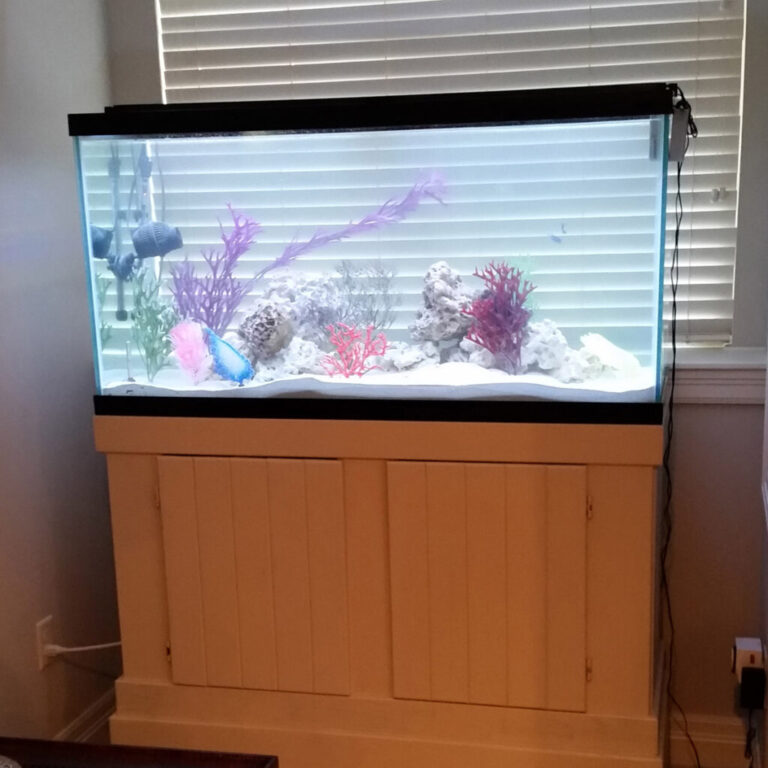 The Aquarium Nitrogen Cycle The nitrogen cycle is the process by which organic waste is decomposed, oxidized and then converted into gases by living organisms. Every aquarium begins with what is called “new tank syndrome”. The aquarist is feeding his fish on a daily basis, and in doing so, adds proteins, fats, lipids, cellulose, and… 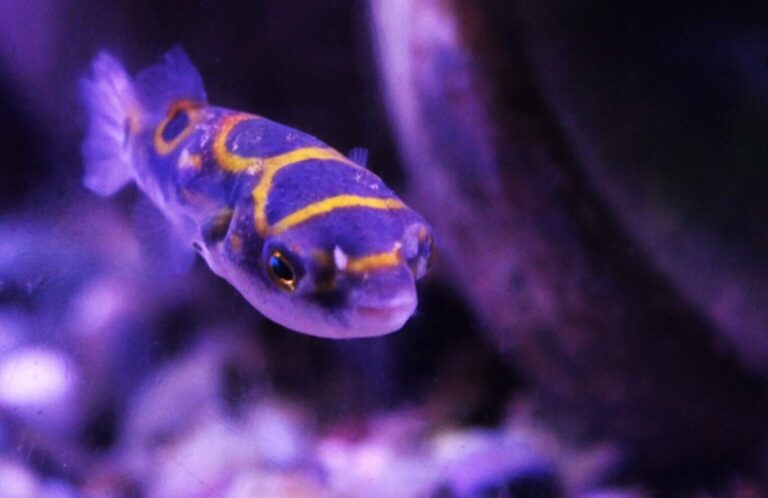 Presence of the Ich disease is an indicator that something in your aquarium is causing stress on the fish. This stress factor can be caused by:   Temperature changes New Tank Syndrome Ammonia Nitrites other disease Bully fishes Lack of oxygen Detritus (organic waste) Osmotic stress (too little salt and/or minerals) Nitrates (in rare cases)… 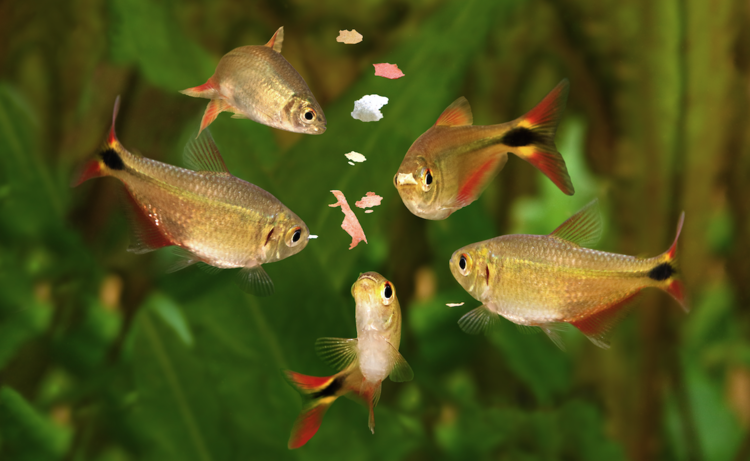 What if I can only feed my fish 5 times a week? Fish in the wild prefer to look for food in the morning and evening. Fish are natural foragers and will not pass-up an easy meal. In fact, when you approach a fish tank and the fish act hungry, this means they are well-fed…. 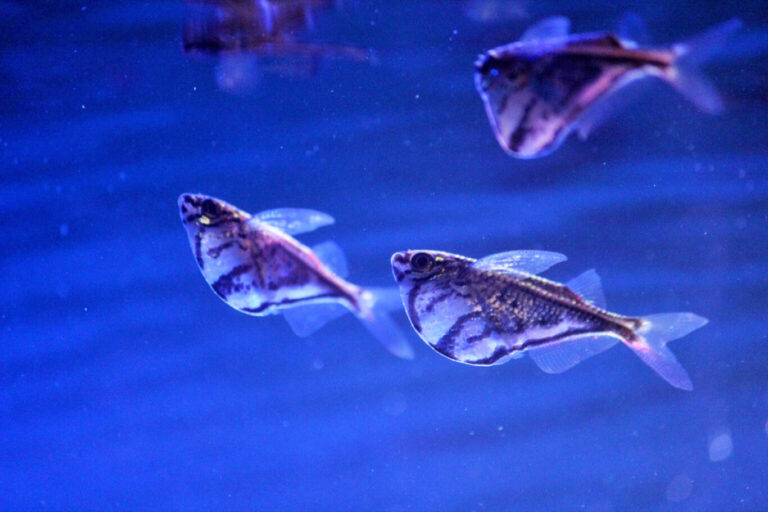